Algomedix is developing a non-opioid, non-addictive, novel TRPA1 antagonist for the treatment of acute and chronic pain.

Utilizing its novel TRP drug discovery approach and research capabilities, Algomedix is focused on the advancement of a novel, small molecule TRPA1 antagonist for the treatment of pain. This clinical candidate offers the potential for a next-generation analgesic devoid of the addiction and abuse liabilities, as well as other adverse effects inherent in the opioid class of drugs.

The effective treatment of both chronic and acute pain is a significant health challenge. Existing treatments, including opioids, nonsteroidal anti-inflammatory drugs (NSAIDs), and gabapentanoids have significant shortcomings including safety, tolerability, CNS effects, abuse and addiction.

Targeting Pain at its Source
The novel TRPA1 antagonist targets the pain sensory nerve fiber endings that transmit pain in response to injury and inflammation throughout the body.

Algomedix’s novel TRPA1 antagonist works by blocking pain at its source in the peripheral nervous system. As illustrated below, TRPA1 is highly expressed on nociceptor nerve fiber endings — the origin of pain signaling. At sites of tissue damage and inflammation, a large number of diverse inflammatory mediators, such as prostaglandins, eicosanoids, bradykinin, histamine, serotonin, cytokines, and reactive oxygen species, are produced at the site of injury. Many of these mediators activate TRPA1 either directly or indirectly via actions on other receptors, leading to the generation of action potential which is a pain signal sent to the brain. Hence, TRPA1 functions as a critical signal detector and integrator for a variety of proalgesic and proinflammatory molecules, making it an important target for development of a novel drug for pain.

Due to the selective expression of TRPA1 on C-fibers in the peripheral nervous system, the Algomedix therapeutic is able to act directly in the periphery and thus does not need to enter the brain to be active. The drug has shown substantial efficacy in reversing established pain in multiple chronic pain models, such as osteoarthritis (OA) without adverse effects. Effective pain relief was obtained without sedation or ataxia. 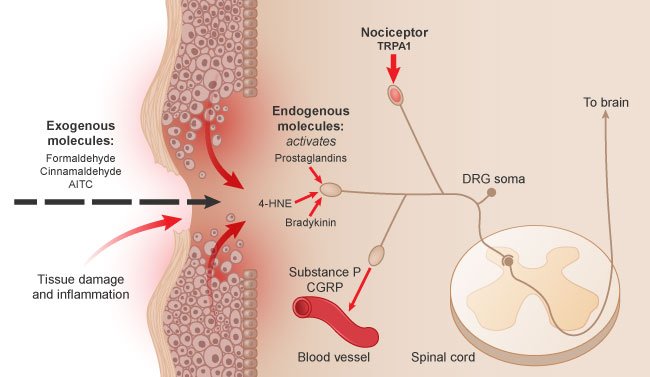 As seen in the illustration below, TRPA1 functions as a receptor-operated ion channel (shown in green). When activated, the TRPA1 channel opens to allow cations, such as calcium, to enter the cell resulting in the generation of a pain signal. Algomedix’s novel drug acts as an antagonist by binding to the TRPA1 receptor and keeping the channel in a closed state and preventing excitation. The nerve fiber is unable to generate action potential when TRPA1 is blocked by the drug, thus preventing the initiation of a signal that leads to pain sensation.

Algomedix has demonstrated substantial preclinical evidence supporting the ability of its TRPA1 antagonist to inhibit acute and inflammatory pain responses. These findings have shown the drug is rapid acting and analgesic efficacy is maintained during chronic dosing.

This research includes demonstrated efficacy in the Chung spinal nerve ligation model for neuropathic pain. Data demonstrates that the compound has a clear dose-response relationship and is able to achieve a high level of inhibition. Data also indicates a low level of brain exposure and no adverse behavioral effects. This supports use for treating indications such as diabetic neuropathy. In addition, the antagonists also demonstrate efficacy in a chemotherapeutic-induced peripheral neuropathy (CIPN) model.
Lastly, the Algomedix drug has been shown to be effective in treating pain in an osteoarthritis model.